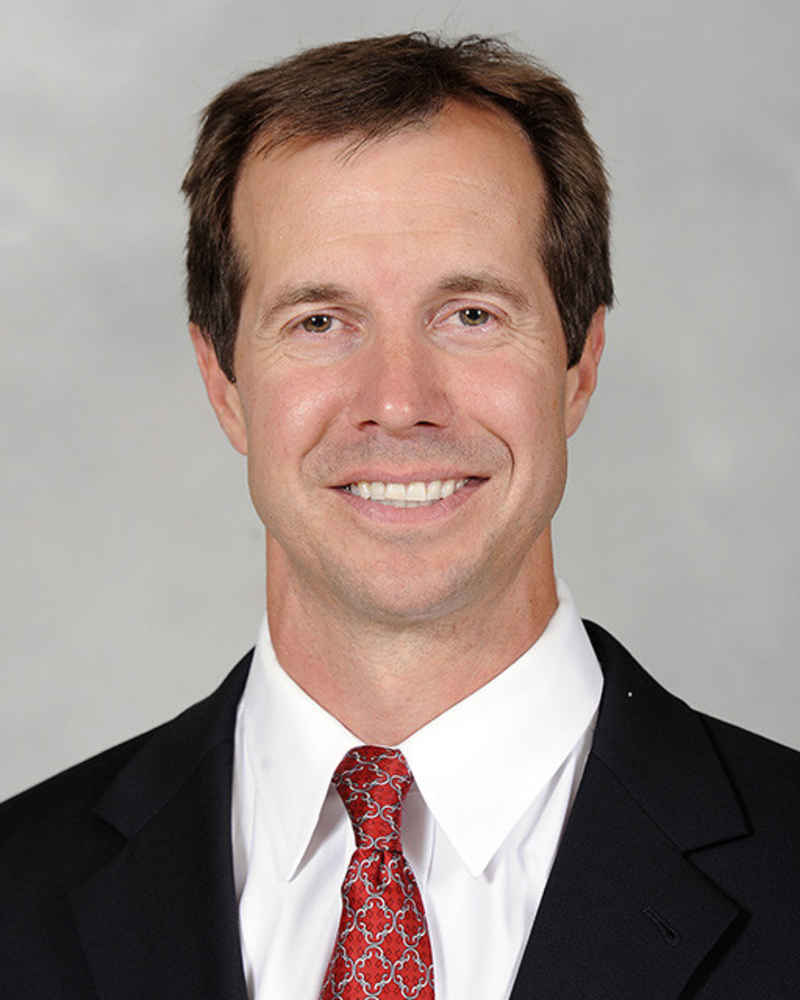 John Tillman was hired as the University of Maryland's head men's lacrosse coach on June 16, 2010, becoming the ninth coach in the then-85-year history of the program. Tillman came to College Park after three years returning Harvard lacrosse to national prominence and twelve seasons as the top assistant at Navy, during which the Midshipmen experienced some of the best years in their storied history.

Tillman has experienced immense success since taking the reins in College Park, leading the Terps to five NCAA Final Fours and four championship game appearances in six seasons. He has garnered an 80-26 (.755) overall record at Maryland - the most wins ever by a Maryland coach through their first six seasons. The Maryland defense has ranked in the nation's top-10 in scoring defense all six seasons of his tenure.

Maryland has won 32 games over the last two seasons - the most in the nation over that span. Additionally, Tillman has won 14 NCAA Tournament games since 2011 - also an NCAA-best.

Additionally, the program's accomplishments have translated to the classroom, as Tillman has had 12 USILA Scholar All-Americans in six seasons. The 2015 spring semester and 2016 fall semester combined for the program's highest GPA in more than 10 years.

The Terrapins won a program record 17 games in addition to piecing together a single-season record 16 consecutive wins in 2016 as they returned to the National Championship game, where they lost an overime heartbreaker to UNC. Tillman's team swept the Big Ten regular season and tournament titles, while compiling the NCAA's top-ranked RPI. Eight players earned USILA All-America honors and Matt Dunn was named a Senior CLASS Award First Team All-American. Maryland also set a MLL record with six players selected in the first 19 picks of the 2016 MLL Draft.

Tillman's third season in College Park saw the Terps ascend to the top of the national rankings for the first time since 2006, following a 12-10 win at then-No. 1 Loyola on Feb. 21. Maryland earned a bid to the NCAA tournament for the 11th consecutive season, which is the longest active streak in Division I men's lacrosse. Seniors Jesse Bernhardt and John Haus became the first Terrapins since 2006 to earn first-team All-America honors, leading a group of seven Maryland honorees.

The 2012 season was viewed by many as a rebuiliding year after Maryland graduated 17 seniors in 2011, but Tillman rallied the team and the Terrapins returned to the NCAA championship game with sensational postseason performances from seniors Joe Cummings and Drew Snider among others. Five Terps earned All-America honors following Maryland's 12-6 campaign and junior Jesse Bernhardt was selected as co-recipient of the ACC's first-ever Defensive Player of the Year award.

In his first season in College Park Tillman guided the Terps to a 13-5 record, the 2011 ACC championship (the program's first since 2005) and a berth in the NCAA championship game (the first for the Terps since 1998). Eight Terrapins earned All-America honors in Tillman's first season, which is the most Maryland players selected in a single-season since 2004.

Widely considered one of the top coaches in the country and a dynamic recruiter, Tillman was the head men's lacrosse coach at Harvard for three seasons prior to his arrival in College Park. His last recruiting class for the Crimson was rated No. 3 in the nation, according to Inside Lacrosse.

During his three seasons at Harvard, Tillman compiled an overall record of 20-19, including an 8-5 mark in 2009, which was the Crimson's highest win total since 1999.

Tillman's time at Harvard produced a number of the most memorable wins in the program's history. This past season, during which Harvard climbed as high as No. 11 in the national polls, Tillman guided the Crimson to an 11-8 victory over No. 6 Princeton, which was the first time Harvard had defeated the Tigers in 20 years. In 2009, Tillman led the Crimson to a season-opening 9-6 upset victory at No. 5 Duke.

Tillman improved his teams in every aspect over the past three seasons. Prior to his arrival in Cambridge, Mass., the Crimson ranked 40th and 42nd, respectively, in total offense and defense. Tillman's defense ranked as high as No. 3 in the nation, while his offense rose to No. 15 in the country. He also dramatically improved Harvard's extra-man offense, from the 51st-ranked unit before he arrived, to a perennial top 15 unit.

Prior to Harvard, Tillman spent 12 seasons at the U.S. Naval Academy in Annapolis, Md. After six seasons as an assistant coach, he was promoted to head assistant coach and offensive coordinator prior to the 2002 season. From 2004 through 2007, Tillman helped lead the Midshipmen to the some of the most successful seasons in program history, including four straight NCAA tournament berths, four consecutive Patriot League tournament titles and four straight Patriot League regular season championships.

In 2004, with Tillman at the helm of the Navy offense, the Mids made a remarkable run through the NCAA tournament, defeating three Ivy League teams (Penn, Cornell and Princeton) en route to a spot in the national championship game. Tillman's offense was a key component of Navy's success that season, ranking third in the nation in scoring offense. Following the Mids' tremendous 2004 season, Tillman was awarded the first of his two Collegiate Lacrosse Assistant Coach of the Year Awards by the Maryland State Lacrosse Coaches Association.

Tillman started his coaching career as an assistant coach at Ithaca College. He spent four seasons (1992-95) with the Bombers, helping lead them to the Division III national semifinals in 1992.

In addition to his extensive coaching experience, Tillman also serves as a member of the Tewaaraton Award Men's Selection Committee.

A 1991 graduate of Cornell University's School of Hotel Administration, Tillman was a three-year member of the school's Dean's list. He had the opportunity to play for legendary coach Richie Moran and was a member of the 1989 squad that earned a berth in the NCAA tournament.

Tillman was a goalie when he entered college, but played a number of positions for the Big Red, giving him a great appreciation and understanding for the overall game of lacrosse.

Tillman played professionally for the Baltimore Thunder and the Washington Power of the National Lacrosse League. During his final two seasons in Baltimore, he helped the Thunder reach the NLL Championship and Semifinals. Tillman also played for the Toyota Lacrosse Club, who won five-consecutive Southern Division Championships, including a world championship in 2000.

A native of Corning, N.Y., Tillman was previously commissioned into the U.S. Navy as a fleet support officer and was awarded the Navy Achievement Medal.

"I think John is one of the brightest Division I coaches out there and will do an outstanding job at Maryland. He's an outstanding person; very dedicated with a great work ethic and will be a positive influence on the players, his coaching staff and the University."

"I have great respect for John Tillman and the approach he brings to the game. He is a tireless worker, outstanding coach and even better human being."

Kevin Plank, Maryland Football '95, founder and CEO of Under Armour

"Coach Tillman brings a strong track record of success and an incredible work ethic to College Park. A tireless recruiter and an expert motivator, he maximizes his players' talents and is poised to lead Maryland's program to new heights."

"John will be a tremendous asset to the University of Maryland, as he is very much a class act."

"I'm thrilled to have John Tillman as Maryland's head coach. He's had high standards for himself and his teams throughout his successful career at Harvard, Navy and Ithaca. He'll make all lacrosse alumni proud of his selection. The future is bright for the Terps."

"Coach Tillman is an outstanding person and a credible guy, who I believe can lead Maryland to a national championship. He is a great competitor and was always very respectful when we played against his Navy teams. Maryland is fortunate to have a guy like Coach Tillman as its next head coach. I think he's a guy that all of the alumni can get behind and rally around as the Maryland head coach.”